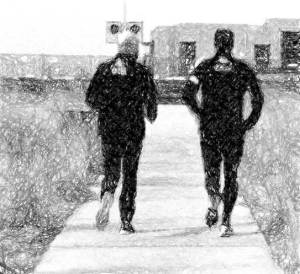 My cousin was in a massive fridge the other day.
There’s a photograph up on his Facebook page, weatherproof jacket and thick balaclava, the traumatic effect of the glacial chill still frozen in his eyes.  Behind him sits a treadmill, the main reason why Gary has been visiting the fridge. You see, my cousin is preparing for a 42km marathon at the North Pole, a race of deep snow drifts, temperatures of minus 30 degree Celsius and the company of armed guards to keep polar bears at bay. My bravery at retrieving a frozen chicken fillet from the back of the freezer the other morning somewhat pales in comparison.

Gary has completed a number of marathons over the last few years, including an ultra- marathon in 2011, a 100km event in 2012 as well as five marathons in five consecutive days last year. Think back to the scene in the original Superman movie where Clark Kent sprints across the countryside, races a passenger train and arrives at his home ahead of a carload of friends. Gary is exactly like that, minus the Lego-type hair and the bad special effects.

I read about what this bloke is doing and I say to myself “wow, what that lad is doing is inspiring, unreal, amazing, fairly nuts and that everyone should support the event” then I remember he is my brother and I just think “what a sap” – Anthony Seery

Although the challenge of the North Pole marathon is to raise funds for charity, my cousin had an alternative reason for taking up running. Back in 2008 Gary suffered a serious bout of depression and afterward he was desperate to rebuild his self-confidence. In a recent interview Gary explained how running offered him ‘little rewards’ which grew with each new challenge. ‘It was a way for me to get back on my feet,’ he says.

This arctic expedition is a sign of Gary’s bravery but what is even more courageous is his frankness when discussing his mental health. The matter of depression is often blurred and misrepresented in film or television, trivialised, romanticised even. This can certainly be the case with the writing world.  I remember reading a piece which leaned toward the notion that depression is somehow a beneficial condition to have as a writer. That’s like saying that one of the advantages to getting malaria is that it offers the chance to see the new ward they built in the Mater hospital.

Depression can be tough to talk about. And for those who try, it can be difficult to illustrate. But I think it is someway captured by Kurt Cobain in his lyric from the In Utero album where he sings the line ‘I miss the comfort in being sad’. For some, this seems to refer to a yearning for the melancholy. But this was from Nirvana’s final studio album and came at the height of the singer’s battle with drugs and depression. In this state the sufferer can be so removed that they long for the feeling of sadness. Because sadness is a true emotion and a healthy response to something that might be happening in their lives.

There is no sentimentality. There is no self-pity. It is the loss of motivation and inspiration. It is a separation from people, from music, from art and hope. The poetry only comes after each bout, with a need to tell the world that the depression has not won this round. But if ignored, there is always the danger that these wins can become more fleeting and further apart.

it’s not possible to get rid of (depression) overnight, you can’t just make it disappear, it takes time but running helped with that – Gary Seery

For me, Gary is not running to escape the issue of depression.
He is running to catch himself up.  And each time he does I hope he pats himself on the back for his courage and enjoys being himself again for a time. And if the hint of change begins to return I’m sure he will always have his trainers close to hand, ready to run when the time is just right.

If you’d like to donate to support Gary reaching his target of €42,000 and to help provide a Dublin family with a decent home click here.